Not for me nor for Sílvia of course, but for Ona!

She even attended some talks! :) 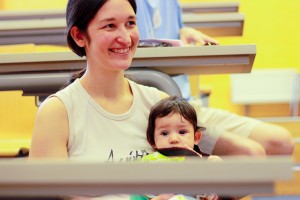 Sadly we only stayed for some days, more to catch with some of you[1] and the weather was quite hard for her.

All in all a short but intense GUADEC!

It was really nice to meet all of you again. Hopefully by next year Ona is going to speak some so she can send her first paper :D

[1] Now we know that Patri and Calvaris will take care of her for next GUADEC :)

As everyone attending GUADEC is right now enjoying the party at Fléda, and Sílvia and me are missing it for a good reason :) let me give you a tip for the remaining days:

Are you feeling hungry and looking for a delicious place to eat some arabic/vegeterian food here at Brno? Look no longer Kupé is what you are looking for!

Not only the food is great but their stuff is really helpful, they speak perfect English (and the menu is also available in English) and the smoothies are awesome!

Oh and as a late notice:

Triple as for me, Sílvia and Ona :)

That’s what the midwife asked me 20 minutes later after Ona1, our first daughter, was born (on April 3th). 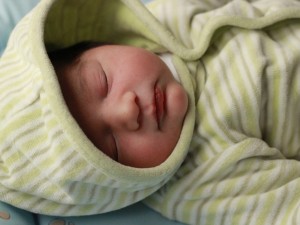 More photos if you wish :)

And, no, I haven’t smelled any newborn, but man, they smell so great!!!2

Both mama and kid are doing fine, circa usual newborn issues :)

To cope up with all advices/tips that everyone is giving you about rising kids, we found a great book3: Kiss Me!: How to Raise Your Child with Love. Which is the English version of this other one (in Spanish and also longer): Comer, amar, mamar.

One thing that always get on my nerves with Javascript is that it was a pain (until today for me) to get from an HTML element to the actual javascript that runs once you hover, click, etc that element.

I’m a visual kind of guy so my rationale was:

Today, tired of it, I start looking for a solution, and I found an amazing one, let me introduce you visual events 2!

It’s a bookmark that you place on your browser and if you click on it the page gets blue rectangular overlays on all elements that have a javascript event handler!

But not only that, if you hover over one of those boxes you will see what I was expecting from the beginning: the code that is executed and where it lies (which file and line).

TL;DR; Praise Nicolas Delvaux every time you see him, then go check Deckard. An online tool to test translations in Gtk+ (and Glade) based applications. As a translator you can imagine how cool is that!!

You know the scenario: you are at GUADEC talking discussing about how to make GNOME even better and then you realize a great idea: what if gtranslator was able to allow you to open glade with the current UI that you are translating with the translations that you are making1?

Half a year later, you don’t get that, but something really cool, a web based version of that!

Wherever you are Nicolas, if we ever meet, be sure to ask for your beverage of choice, you are more than invited!

Translators out there, be sure to spread this amazing news into your teams!

Warning that’s a rant about Spanish voting system, skip it if not interested.

First of all the facts:

So looking at the facts… should I still have some hope left that one of my new years resolutions (be able to vote) will come true?

As a hacker and computer literate I know that it could be feasible to do electronic voting, or even going to the embassy4 or even keeping the good old post system, if there was any interest in using it.

The most amazing thing about it is that nowadays, and we have done that already quite a few times, we wake up on the morning in Berlin, take breakfast, pack some stuff in our backpacks and within 4-5 hours (just 2:30 hours of plane) we are in Barcelona chatting happily with our family and friends.

How come the voting envelope hasn’t still arrived at my home in Berlin?!

We went back to Catalonia for Christmas to visit our family and friends (and who doesn’t do it :) and while on Vic1 I found the bus for blood donation on my way to buy the best chocolate croissants ever2.

Whenever I’m around Catalonia3 I try to give blood (4 times a year allowed for men over 18 years and more than 50kg), but this time some ideas came to my mind:

Anyway, just as the Catalan blood bank system says: “one time (giving blood) is not enough!”

Last year around this days I was still living near Barcelona (Molins de Rei actually), some days later, on the November 4th I took a flight from Barcelona to Berlin my new home as of now, and since then, things have happened in a quite fast peace…

We (with Sílvia obviously!) went there as I got a job offer from der Freitag, a newspaper, where I help building their website. With such a big move, packing, unpacking, moving, legal stuff and so on kept ourselves busy for quite some time. Thankfully I stayed ~one month with Kat and Dave (million thanks again!!) which helped a lot in getting papers sorted out and finding a flat where to stay :)

German classes started on January (12h per week plus 40h work) and a wedding in Catalonia on June  30th was the new thing to keep ourselves busy.

Right now German classes are still undergoing, we are going to make a late honeymoon to Japan1 and we are starting to get ready for the next small thing: we are expecting a baby!

We are really excited about it! All these ultrasounds and 3D images that nowadays doctors do and everything really get you the (obviously not like the future-to-be-mom) feeling that something is being cooked in your wife’s belly :D

Surely times will keep changing from now on! :D The baby is expected to be around early Spring so (s)he2 will not get frozen by the Berlin’s winter which their parents are still not used to :)

Looking back before coming to Berlin looks really far far away and it’s been only one year!

Next month (November) is around the corner, and so it is the next GNOME Translation Project meeting!

Feel free to add yourself and suggest discussion points on the above link!

Many thanks to Gabor for organizing it!

I had a draft of this post since two days, as a way to make a call for action to fix the offending bug once and for all1.

Fast forward, and thanks to my personal new hero of the day, Martin Robinson, we, the GNOME Translation Project community can finally start translating in a reliable way WebKitGTK+!

I don’t have the honor to know him, but, please, if you happen to see him, buy him his beverage of taste and let me pay the bill, I will gladly do that!

A lot of credit also goes for Chris Leonard who has been tirelessly chasing this bug.

Since yesterday the translation world is a bit more shiny :)

Thanks a lot Martin and Chris!